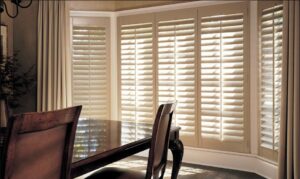 Window shutters in Penn Valley, PA are highly efficient, and they can give your home a new sense of elegance and style. They are in demand because they are permanent fixtures on a home. They don’t ever have to be replaced and you can enjoy them for as long as you live in the house, knowing that they are going to raise the value of the house whenever you move and sell it. You are going to want to think about lots of different things when you get the shutters, like how big you want the slats to be, what material you want, what color is best, and whether you want standard or hidden window shutter tilts. Here are some details on the tilts.

Standard window shutters are going to have a bar that runs down the middle of the shutters. You can use that bar to tilt the slats open, close them, or place them somewhere in between. That’s how they normally look and that’s what comes as standard.

The biggest difference between standard and hidden tilts is the style. You won’t see that bar on the hidden shutters and that might give you a heightened sense of style in the space. It might also make the room look more streamlined and simple, which may be what you are going for.

Any window shutters are valuable on today’s market, but if you get shutters that have the hidden tilt, they are going to raise the value of the home even more. It depends on just how high you want the value to go and what you want the appearance in your home to be like.

All shutters cost more than other window covering options, but hidden tilt shutters are going to cost a bit higher even yet. That is because they have an extra mechanism in there that is more complicated for manufacturers to create, but that looks better and operates in a different way as well. If you have extra in your budget beyond what standard shutters will cost, you might want to get the hidden tilt option.

Whatever way you go, window shutters in Penn Valley, PA are a worthwhile investment in your home. They are permanent fixtures that will help you to avoid getting new window coverings ever again. They will raise the value of your home, too. They look elegant and stylish and that’s not something that will ever go off trend. If you have decided that you want window shutters, whether you know enough about standard or hidden tilt yet or not, contact the professionals at Blinds and Drapery Showroom and we can help you figure out what you can afford on the budget you have to offer to the process. We’re here to help you get results

Schedule Today by Appointment Only